Despite my love of “craft coffee”, getting consistently good results at home is tough - and may be too time-consuming, especially for a pre-work cuppa - so I have added a Nespresso machine to my setup for when my inner barista needs a day off (and so other householders and visitors can make something that doesn’t involve opening a jar).

Unlike the other pod-based gadgets I’ve tried, their coffee is pretty convincing - I’ve paid to be served far worse espressos from dedicated kiosks. Having been tempted into one of their Apple Store-esque shiny shops when I had some time to kill, my natural skepticism was quickly overcome by having an espresso shot of my choosing prepared in front of me (by a uniformed staffer using one of the actual machines) and finding that the end result looked and tasted pretty good.

Nespresso produce their own capsules - filled not, despite popular rumour, with Nescafe but with actual ground beans. The options are pretty good (although I’m a bit underwhelmed by the decaf) and not too expensive. There are currently 14 different espresso options and 4 “lungo” offerings (these don’t sit quite right with me - too watery for my liking) plus 3 “flavoured” variants; there are 3 decafs in total - 2 espresso, 1 lungo.

Being able to try instore before you buy is a definite plus and the descriptions are fairly accurate. A further plus point is a recycling scheme where spent all-aluminium capsules can be returned to Nespresso for processing either on a drop-off instore or pickup with next order basis (recycling bag supplied on request).

Let’s face it, it wouldn’t be much fun if you had to stick to the manufacturer-approved coffee range. Nespresso has now been around long enough for their patents on the capsule design to have lapsed, allowing competitors to market compatible capsules.

I’ve not had much success with the refillable type that you put your own ground coffee in - a lot of fiddling around, very easy to get wrong and, as the resulting capsule assemblies aren’t sealed, you can’t store them for long once you’re done. On the plus side, they’re pretty cheap so if playing with your coffee’s your thing - and you don’t mind getting coffee grounds everywhere - you could have some fun with these. There are a number of competing systems out there but they all seem to suffer from similar basic issues (plus the occasional report of capsules getting stuck in the machine). Scores highly on geek value but I’d hesitate to recommend them on taste or practicality.

A far better alternative comes from Cambridge-based Big Cup Little Cup who have developed a range of pre-filled capsules with an emphasis on sourcing and blend quality. Currently available: 5 lungo (“big cup”) blends - including a decaf variety (which I’ve been unable to try as it wasn’t in stock when I placed my order) - and 4 espresso (“little cup”) options. And unlike the Nespresso originals, they’ve really nailed the lungo capsules which are at their best as a standard 110ml pour. 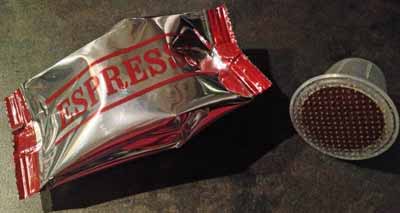 As, seemingly with all non-Nespresso options, the capsules are not sealed, each pod is individually wrapped which does have the advantage of giving off a wonderful coffee aroma when the foil pouch is opened, but means that the capsules won’t fit into an existing Nespresso holder (except for the bowl types) and doesn’t feel like the most environmentally friendly option. The capsules themselves are recyclable though and can go in with the standard plastics collection rather than needing a special arrangement, but, unlike the original capsules, you’ll need to empty the spent grounds out first.

I’m struggling to pin down a favourite among the espressos, which is a good sign. I initially gravitated towards the “toffee and vanilla” El Salvador Honey Process, with the complex Homepark blend a close second, finding the full-flavoured Millers Yard rather unapproachable and a touch too bitter for my taste. A few days later, I’d probably name the Sumatra Gayo Mountain as my first choice and have learned to appreciate the bitter chocolate notes of the Millers Yard although - as I have an intermittent problem with bitter notes and can find them overwhelming - it’s never going to be my top pick.

As this visual comparison of espresso shots shows, there’s surprisingly little between the original Nespresso capsules (left) and the Big Cup Little Cup alternatives (the depth of the crema can probably be attributed to the difference in freshness-retaining techniques). 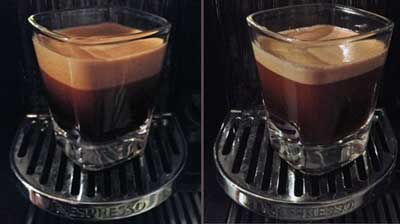 Personally I appreciate the extra options that Big Cup Little Cup brings and feel that they have a more consistently authentic espresso taste, to the point where I’m reasonably confident that if you served one to a guest there’d be no questions asked. As for the lungos, there’s no comparison - Big Cup Little Cup wins hands down on texture and flavour.

If you fancy giving Big Cup Little Cup a try for yourself, you can get 15% off your first order with this link (full disclosure, I should get a little something off my next attempt to sample the decaf as well!)