There’s not much to fiddle with on a domestic espresso machine, but a surprising amount of things to get wrong…

Pro barista machines (the ones people win competitions with, not the semi-automated things they have in Pret and Starbucks) give you control over temperature and pressure. Home machines mostly just ask you to remember to refill the water tank before the pump runs dry. So all I need to concentrate on/get to mess up (delete as appropriate) is the grind (correct texture and consistency are the key, the pre-ground stuff is considered cheating), “dosing” (a fancy word for using putting the right amount in), “distribution” (placing the ground coffee evenly in the device) and “tamping” (packing the coffee down into a solid puck with a suitable gadget; I like gadgets).

With even the cheapest of espresso makers, the bit the human gets to tinker starts with the portafilter (or “handle” if you prefer to stick strictly to the technical terms). This is mine:

Into this fits a selection - unless you’ve chosen somewhat unwisely - of “baskets” to put the ground coffee in. This is my pressurised (at a corner-of-your-kitchen level, pressurised vs non is a matter of taste and, above all, availability - merit and religious zeal readily available on both sides of the argument) double espresso basket.

A half-decent espresso machine should come with at least a single and a double espresso basket and maybe a pod adapter. Especially down at the shallow end, baskets are not cross-manufacturer compatible so don’t bank on swapping out what’s provided in the box at a later date.

Sadly the industry marketeers have decided to confuse us all with this one - technically the Senseo/Tassimo/Nespresso-type things aren’t so much pods as capsules with everything you need to make the drink of your choice already in the sealed unit that can only go into a specialist machine. Nothing wrong with that but it’s not espresso (whatever the packet says); espresso is produced under higher pressure than those machines are configured to provide.

The pods that work with compatible espresso machines - ESE (Easy Serve Espresso) pods - are more akin to tea bags; you get a box of individually foil-wrapped pre-dosed, pre-compressed coffee pucks that drop into the special adapter. The result is a single shot of espresso.

To make pod coffee, drop the correct adapter into the portafilter: 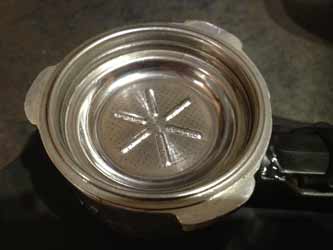 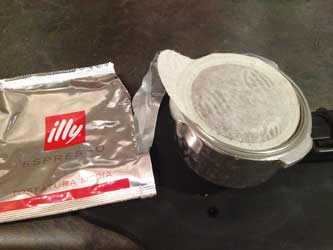 Follow the instructions for your machine for clipping the portafilter into place and making water flow through it and your results should be something like this: 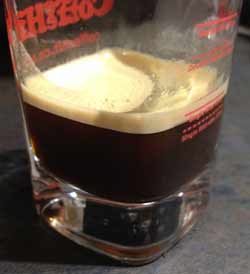 Which is ok. Not up there with the true artisan stuff but at least on a par with - and in many cases better than - what’s served up to commuters in railway station franchise operations up and down the country. The crema (the micro froth on the top, a result of the water pressure involved in extracting the shot) is a bit flat but it’s perfectly drinkable. When reading up on this, I found the memorable description of pod coffee as a “B+ cup of espresso” in a world where “most people have never had anything over a C+”.

Why go the pod route? Well, convenience mostly. Strange as it may seem to someone who got into this whole coffee lark as much to have a new craft to master as to get something to drink, not everyone wants to tweak around endlessly in order to obtain, at best, 50ml of hot, brown liquid. Plus there are times when you haven’t got time to “do it properly” before train-catching duty intervenes. The rise of the pod adapter may, however, have lead to the downsizing of the baskets (diameter-wise) on many domestic machines, including mine, which I suspect makes even distribution harder - and definitely makes switching to another brand/type of basket harder - so I must say I have mixed feelings on the subject.

Start off by grinding up some coffee and prepare to “dose” the right amount. Award-winning professionals do this by eye, people in high turnover outlets tend to have an automated grinder that dispenses a perfect dose each time, I have invested in a cheap and cheerful set of accurate-ish scales that measures down to 0.1g increments from Amazon. And a spare ramekin as a miniature measuring bowl (thank you Dine In For £10 promotions). 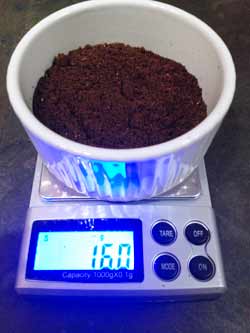 Clip the basket (mine’s a double) into the portafilter, run some hot water through it (“draw a blank shot”) from the machine to a) prime the pump b) heat everything up (cold gear, cold coffee - nobody wants that) and c) get a quick heads up as to how well you cleaned the machine last time you used it. Dry the basket carefully afterwards, preferably without burning your fingers. 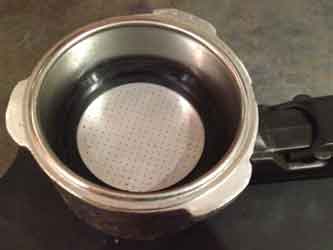 Now add the coffee to filter basket. Remember that the ultimate aim is to end up with an even puck that encourages the hot water to be forced through in a uniform manner - don’t neglect the edges. There are so many theories about this part (and a certain amount of variance to cope with the quirks of a particular machine) that I’m just going to refer you to Google at this point. 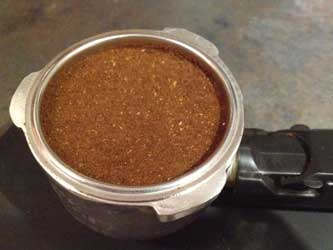 Coffee loaded? Great. Now grab a tamper and press down (supposedly with around 30lbs of force) to compress the loose coffee down into a solid puck. Once you’re happy with it, clip your portafilter into place in the machine and get the hot water going. In theory you’re looking for a smooth pour (not dripping/stalled) where the coffee falls gracefully into the cup for around 27 seconds to produce the perfect amount of espresso (note the lined glass in the next pictures - a great help). I have managed this less than 5 times but I live in hope. 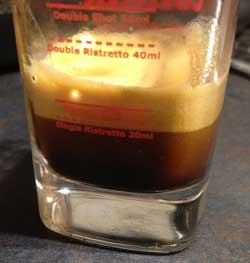 A single espresso (for ease of comparison with the pod version). 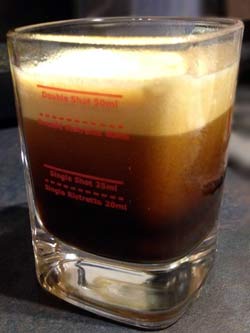 The pic got a bit over exposed by the camera (my excuse, sticking to it) - the crema wasn’t really that pale, it’s supposed to be pale coffee colour (or what I’ve heard described as “a glorious red brown” if you’re on competition form), not a milky off-white. What I was trying (and mostly failing) to capture was the way the crema goes through the freshly poured shot rather than sitting on the top, giving a settling Guinness style effect. This is a good sign that you’re about to enjoy a tasty drink (although the use of a pressurised basket may give a false sense of security, or, if you’re unlucky, a cup full of foam). 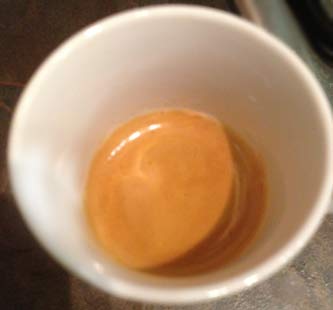 Transfer your coffee to a suitable cup and serve. (See, the crema looks slightly better now the camera’s got a bit more of an idea of the white balance.)

For variation (and to make the drink last a bit longer), consider adding a similar amount of hot water to make an Americano (water added to espresso) or a Long Black (coffee added to water, preserving the crema).